After just a year on the market, Australian-owned Gold Coast vegan cheese and dip company now supply around 900 independent grocery and health food stores around Australia and exports to six countries.

Dairy Free Down Under Co-founder Kevin Flanagan said the company has grown 10-fold in the past 12 months. “we noticed a lot of os products from overseas are in the Australian market” he said. Äustrealians should be looking after Australians. We really need to for employment and all those sorts of things”.; He said he and his family decided to start the company after spending years of struggling to cater to the needs of their dairy-intolerant daughter. “nearly every second person we talk to has one (a dairy intolerance), or they know someone who does,” he said.

Dairy Free Down Under employes 30 staff at its Carrara factory, including Mr Flanagan’s wife Jenny and their son Brad 26. 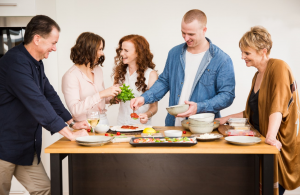 Mr Flanagan said the company wanted to start supplying to Coles and Woolworths and expand its range of cheese, with plant-based halloumi, ricotta and feta to be realised in the next two months.

Featured in – WEST AUSTRALIAN
May 1, 2019
Sign up to our Newsletter